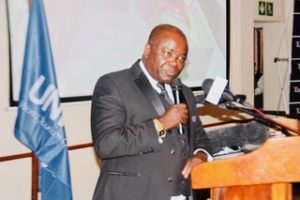 Hon. Chitotela was born on the 21st of April in 1972. And from a young age he realised that in order to be successful, education would play a key role to his future and so he suspended all other activities and focused on his studies.

Upon completion of his secondary school, Hon. Chitotela went to the university were he would study for and graduate with a degree in Marketing. This was the first of the many professional qualifications he would later pursue and obtain .

Hon. Chitotela joined politics in 1998 and describes his defining moment as when he met the Fourth Republican President Late Mr. Michael Chilufya SATA who became his Mentor. With that in mind, he contested for the PAMBASHE seat in 2011 and emerged victorius. A seat which he holds to-date as a law-maker.

Hon. Chitotela is also a holder of a masters degree in Trade Development and International Relations, A bachelors degree in production management from the Zambia Open University, Diploma in Business Management and two certificates, one in Purchasing and Supply and the other in Finance and Accounting. He is currently a student of Arts and Culture. He also has served on several committees both internationally and locally and has headed among others, the research bureau for the Patriotic Front and Committee on lands, roads and rail.

He was appointed as Deputy Minister for Labour by late Republican President Mr. Micheal Sata and as Deputy Minister for Youth and Sport by President Lungu, before being appointed to full Cabinet Minister as Minister of Works and Supply after the August 2016 General Elections. A New Ministry was created in the name of Housing and Infrastructure Development to which Hon. Chitotela was appointed a Minister. He recently got transferred to the Ministry of Tourism and Arts, a Ministry his life has lived as he loves world animals, birds, etc, keeping some of them at his house.

Hon. Chitotela has always exercised an open door policy in the execution of his duties which trait has endeared him to many.

He is Married to Mrs Lillian Chitotela and together they have 3 children, and is a committed member of the Seventh Day Adventist church where he serves as an Elder. In his free time which isn’t often, he sings.